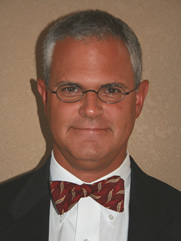 Mr. Lawrence joined the firm at its inception in 1994 as an associate working with Mr. Egan. Having previously worked for Shaw Pittman Potts & Trowbridge and Winston & Strawn in Washington, D.C., Mr. Lawrence teamed with Mr. Egan to provide state and federal court representation to the City of Austin on nuclear power plant operational issues, to Waste Control Specialists on low-level radioactive waste disposal, and for 14 foreign research reactor operators on spent nuclear fuel transport and storage.

Mr. Lawrence received his Juris Doctor from Catholic University of America in 1993. He is admitted to practice law in the State of Maryland, the District of Columbia, and the State of New Mexico. He is also admitted before the U.S. District Court for the District of Columbia, and the U.S. Court of Appeals for the 4th, 5th, and D.C. Circuits. Mr. Lawrence received his Bachelor of Science degree in Nuclear Engineering from Purdue University in 1983. Mr. Lawrence is also a licensed private pilot.